The decade of the 2000s was full of anime and gamers alike had their favorite waifus, which are Japanese for “wife” or “girlfriend”. These characters range from innocent high school girls to complex female leads who redefine what it means to be a hero. Who would you say is the most unforgettable? 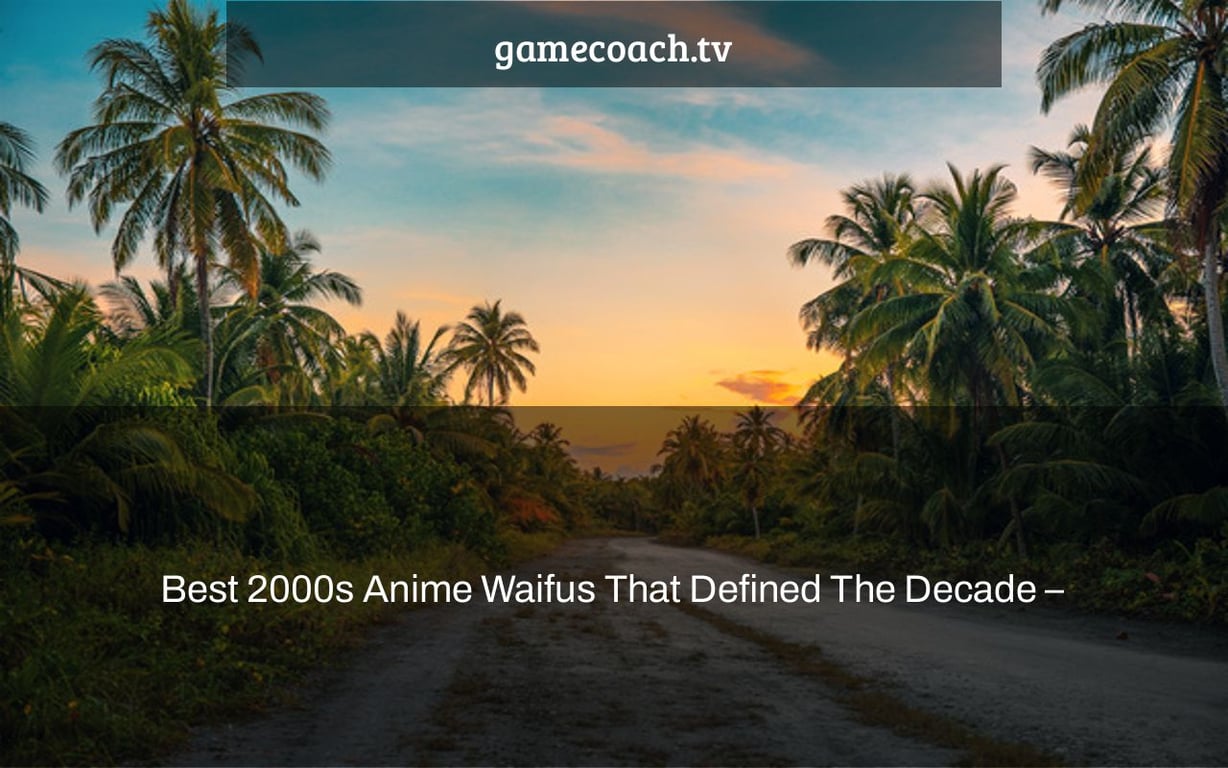 The “anime waifu tier list” is a ranking of the best 2000s anime waifus. The list ranks each character on their attractiveness, power, and overall contribution to the show they are in.

Nobody would argue with me when I claim that the 2020s were a difficult decade. As a result, copium is required in large quantities.

What better way to do it than by merging my two sources of joy: waifus and nostalgia?

So, here’s my list of the finest waifus from the decade of 2000.

I’ll start with Nana since she wasn’t as well-known as the other characters on my list.

Many masculine guys missed out on this gem since the program was advertised as a shoujo series.

Which is unfortunate. If the series had received a little more attention, I’m sure Nana would’ve smashed a lot more waifu tier charts. Before it became a meme, she could’ve been everyone’s goth GF.

She has a vivacious attitude, seldom holds her tongue, and goes right to the point. If you’re suffering from kuudere burnout, this is a godsend.

She also seems like a genuine person since the narrative has so much drama and complexity. I won’t go any farther since I don’t want to give anything away. But you should absolutely try this old favorite.

Fuu was iconic, even though she wasn’t as well-known as her male contemporaries.

With Mugen as the bad boy and Jin as the solemn samurai, Fuu had plenty of opportunities to have fun.

Her encounters with both warriors provided some fantastic sequences and the majority of the main cast’s character development. You can’t help but like her antics.

She sparked the whole narrative by placing a wager with two fearsome warriors. By the conclusion of the series, she had established herself as an indispensable member of the cast.

I completely anticipated Seras to be purely a comedy relief/fan service character, given the entire tone of Hellsing.

And although those qualities were evident at times, she was so much more.

When you witness her descend into a deadly frenzy for the first time, you realize you’re not dealing with an ordinary female warrior. Seras is a force to be reckoned with, whether shattering skulls with her bare hands or going Rambo with huge firearms.

Even by today’s standards, this distinguished her. But it was a gold mine waiting to happen in the 2000s.

Despite the fact that Dragon Ball Z ended in the late 1990s (and we all agreed that GT never existed), Bulma deserves credit.

Even a decade after the program ended, she remained tremendously relevant, and she undoubtedly gained legendary status.

For starters, she was the first female Batman. Not so much in terms of real combat skill as much as in terms of money. In reality, without her, the first part of DBZ would have been a lot more bleak.

Second, her connection with Vegeta is one of the funniest I’ve ever seen. Bulma and Vegeta, instead of being the typical lovey-dovey couple, are always bickering. This made her stand out significantly.

It also helped that she was a prominent character in one of the most popular anime series ever created.

Yoko Ono, although not being able to compete with Kamina’s stardom, was an icon in her own right.

It’s impossible not to fall in love with a sharpshooter in a bikini knocking down massive mechs. It’s simply the way people are.

Besides, Yoko was the show’s most dependable character.

While the rest of the world depended on huge robots and the power of friendship, Yoko Ono was out there shooting people.

Her lively, upbeat nature never failed to brighten up a situation. And her design was much more cute than it needed to be.

I also have to mention that her short-lived teaching job is superior in quality than 90% of recent slice-of-life anime. I’ll never understand why they didn’t produce a spin-off for it.

C.C. is all Kazuma had ever wished for Aqua to be. She bestowed authority to Lelouch, stood by his side through thick and thin, and stole our hearts.

She didn’t even need to say anything to have half the neighborhood melt. Her emotional moments were all the more powerful since she stayed to herself (like a genuine kuudere).

She wasn’t a pushover either, as seen by her repeated forays into peril. One could legitimately ask whether C.C. has any flaws as a waifu.

Even if she had any in the start, the amnesia arc wiped them all away. Seriously, the kuudere’s transition into a cute goofy will always make the character a million times more lovable.

Revy is similar to Seras in terms of attractiveness.

She’s simply a tough lady who has the ability to and will shoot you in the head.

Her talents aren’t related to sucking blood or eternal demons, so she’s a little more relaxed.

She’s simply an ordinary girl with an itch on her trigger finger. In terms of personality, she’s basically a gigantic vibe. Constantly cursing, becoming irritated, and striking anything is around.

Her graphic style also offers just enough of a throwback vibe to set her apart from the competitors. Overall, she’s a legendary waifu that can handle herself in any scenario.

If I’m being honest, I was undecided on where to place Sakura.

Her waifu status, on the one hand, is hotly discussed and shabby. However, no one can dispute her enormous popularity.

As a result, the image of the term “useless” appears in the midst of my list. Despite the fact that her character will improve in Boruto, Shippuden was not that nice.

With continual sobbing, phony promises of “I’ll be an equal member of team seven,” and the silliest conduct I’ve ever seen.

She had some excellent moments and fought Sasori quite well, but that’s not the point. This is one of the rare figures who has achieved iconic stature via notoriety — and that is still significant.

Asuka is the result of everything I described about Revy plus a lot more trauma. I don’t want to think about why greater suffering equals more celebrity.

Apart from the jokes, Asuka was an immediate classic. In reality, the majority of Evangelion’s female cast became enormous stars. However, I believe Asuka stood out the most and so will represent their party.

Asuka’s ferocious character confirmed her as a GOAT, and her red costume rattled more sexualities than any other show at the time.

Plus, her last incident was so outrageous and emotionally draining that I doubt I could ever forget it.

She is unquestionably an icon in the anime community, for better or bad.

I have no evidence, but I believe Holo is the inventor of furries. Consider the possibilities! Holo is virtually S class waifu stuff while also looking like a fox, and the show was big in the 2000s. Everything adds up!

Aside from the jokes, Holo is a fantastic game.

Her connection with Lawrence was fantastic, and they had a lot of funny/memorable moments together. It’s also one of the rare programs where the dub can hold its own against the original Japanese VO.

Her design is simple, but her personality makes up for it totally.

She doesn’t precisely fit into any of the “dere” tropes, which gives her a distinct and fleshed-out vibe.

Bleach, being one of the big three, is expected to include several top-tier waifus. And it does not disappoint.

It really over-delivered, since choosing just one character was much more difficult than it needed to be. But, given how Rukia dominated every popularity survey, I believe it’s reasonable to say she’s the most recognizable.

That’s a fantastic mix, as we all know!

Although many people were unhappy that she did not marry Ichigo, it was also rather pleasant.

Genuine platonic relationship is becoming more uncommon these days. And their synergy made them a formidable team.

She’s practically a dude, drinking, partying, and destroying tables. She also provides a lot of comedic relief since she is often entirely unaware of how regular people work.

Then there’s her great combat talents, which have resulted in numerous spectacular clashes and hundreds of distinct armors to broaden her move set.

And if you’re still not convinced, throw in some fan service.

As I already said, it is quite tough not to like her.

K-On is best described as a meditation that you didn’t realize you needed.

You’ll feel your muscles relax up physically after a few episodes since it’s so pure and charming.

And, to be honest, there is no “one” accurate answer for most iconic. In their own way, each member of the ensemble is memorable and beloved.

I selected Yui because I believe she is the contemporary person’s spirit animal.

She’s really creative, but she can’t be expected to sit still and study. Imagine how famous she’d be if TikTok was made canon in her reality. That would be insane!

She also has a lovely design and some great music. What’s not to like about that?

I’d have no means of proving someone incorrect if they said Taiga single-handedly established the tsundere archetype.

When the episode first aired, this small bundle of bottled-up rage and pouts completely captivated the audience.

Her past made her a sympathetic character, and her bond with Ryuji was genuine. You could see how much they needed one other and compensated for each other’s flaws.

Taiga had an exceptionally lovely design as well as sequences that properly explored her character’s depths. The last half of that remark simply implies that I cried a lot while watching this program.

I still see video dissertations on why Toradora mastered the slice-of-life romance technique now and then. So it’s reasonable to assume that the program won’t be ending anytime soon.

Haruhi’s popularity is poetic, to be honest.

Her whole plot revolves on the idea that she is a deity who is unaware of it. People certainly appear to treat her that way in real life.

Seriously, if you have any free time, look for old footage of anime conferences. Her dance was all over the place, Haruhi cosplay was big, and her figurines were probably worth more than most nations.

People were drawn to this outspoken goddess, and her anime dominance lasted for a long time. As a result, there isn’t even a question in my mind. She is undoubtedly THE waifu who characterized the decade of the 2000s.

The “top 15 waifus” are a list of the best 2000s anime waifus that defined the decade. The list includes characters from popular animes such as Naruto, Bleach, and One Piece.